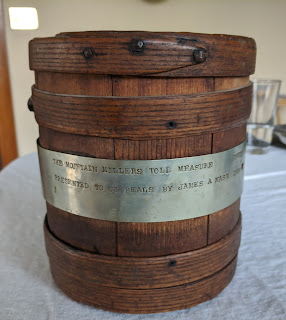 . Back in July of 2020, the PHS received an email from Dexter Beals, inquiring about a bucket that had been in his family for generations. Plainfield's own, Joseph Beals, known as the 'Mountain Miller', was Dexter's 4th great grandfather. Joseph Beal owned one of the first mills in Plainfield that was located on the Mill River. Today the Mill River Mill Site is owned by the Plainfield Historical Society and visitors can tour this unique site which sports the foundations of grist and saw mills, a tannery, and factories that produced a variety of  items, including broom handles and woolen cloth. The last mill closed in 1924.  The inscription on the metal band of the bucket says that it was presented to Dexter's great grandfather, Luther Beals by James A Nash in 1893 and was a "toll measure". It appears that Mr. Nash was also a mill operator in the same area as the Mountain Miller, but later in time.
Dexter's research suggested that the toll, or payment fo…
Post a Comment
Read more